On November 8, 2019 we loaded up and headed to Charlotte, North Carolina for MACE (Mid Atlantic Convention Expo).  MACE is a fun filled weekend for rpg gaming starting on Friday and continuing through Sunday afternoon.  This year was our first year attending this con and boy have we been missing out!  Everything ran smoothly as the vendor hall opened on Friday afternoon and remained as such all weekend long.  Everyone from the Tabletop Crafter's Guild was there and even inducted a new crafter, James Kelly aka The Tabletop Engineer into their fold. Friday evening also began the crafting classes with miniature painting with Vee, The Crafting Muse.  Meeting all the Guild Masters from The Tabletop Crafter's Guild made Friday an exciting first day!
Saturday morning began early with a great selection of games and the vendor hall opening at 10AM.  We had a steady stream of attendees all day with the most asked question: "How did a dental supply company end up here?".  We explained how we were approached by Garreco the manufacturer of Merlin's Magic, and many of our other dental products, about being one of a handful of companies throughout the U.S. selling Merlin's Magic.  Then it just grew from there with resins, silicone rubber mold material and 3D printer filament.  We did pouring demonstrations at our booth with the Merlin's Magic so folks could see just how easy it is to use and had those interested sign up for our door prizes.  The vendor hall closed at 6PM and our class on mold making began three hours later.  Once we had a bite to eat we headed into the crafting room to watch the class ahead of ours making tiles out of Sculpey clay.  This was interesting as we had not ever used this product before, so we watched Charles Wolfe teach his class how it's done.  Once they were finished up we started with our mold making class.  We had good attendance and everyone did a great job, we couldn't have asked for it to go better!
Sunday morning began like Saturday with the vendor hall opening at 10AM and a steady stream of folks most of the day.  At 1PM we held our door prize drawings.  First prize was a set of resin, second prize was a 25lb. box of Merlin's Magic hobby stone, third prize was a set of our adhesive with accelerator, and fourth place was a 7 piece set of Chessex dice.  The vendor hall closed at 4PM and everyone started packing up to begin their journey home.  We said our goodbye's and farewells and soon headed back to Durham.
We really enjoyed meeting all the great folks who came together to make MACE the wonderful show that it was!  Two of those folks were Jeff Smith and Ron McClung and they did a fabulous job coordinating and organizing everything so all could enjoy!  We look forward to returning next year and we hope that you will join us there!
Previous Post
Next Post 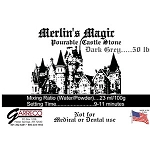